Where does evil lie? 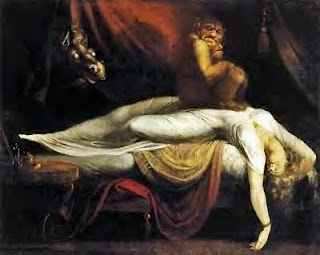 Occasionally I decide to try to have a thing called life. I am not always very successful at my attempts but this evening I triumphed and attended a lecture on art at the newest of London’s venues for art, literature and music (as well as a nice bar and restaurant and an iffy coffee bar), Kings Place. Rumour has it that it receives no subsidy from the Arts Council but runs on the money from various organizations, including the Guardian and the Observer, that have offices in the rest of the building. This will have to be investigated.

The lecture was given by Dr Gail-Nina Anderson and was part of the Talking Art series. Entitled Fearful Images, it was described:

The role of art goes far beyond simply delighting or informing the viewer, and this talk explores a particular strand of imagery designed to rouse a darker emotional response. From Medieval devils to Romantic nightmares, spectral visions to exteriorised neuroses, art has given shape and expression to the things that lurk in those hidden corners we might prefer not to explore. Painters such as Goya and Fuseli call up images intended to provoke a shudder – is this simply sensationalism or do we need to visit the dark side? Does the visualisation of our imagined horrors give them power or put them in their place, and why do we so often find ourselves laughing at what is meant to be scary?

The blurb does not do justice to the breadth of Dr Anderson’s knowledge or her infectious enthusiasm for various works of art, from Fuseli’s The Nightmare to various paintings with grinning skeletons.

I am not about to rehash all she said and would not do so even if I could recall everything. Two points struck me and, surprisingly, Dr Anderson did not seem to make the connection. (Or maybe she is saving it for another lecture.)

Having gone through nightmares, appearances of death (more common in German art of the 16th century than any other, apparently, but that might have something to do with German history of that period), grand apocalypses and the aforementioned skeletons, she came to the idea of evil in art. 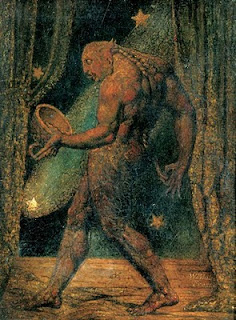 Showing some examples of paintings of witches’ covens and other related material, she came to the conclusion that it was well-nigh impossible to paint or draw evil successfully without making it slightly amusing and not just because we all laugh to ward off evil spirits.

The one artist who managed to overcome this problem, she maintained, was William Blake, whose Ghost of a Flea is, indeed, a terrifying picture.

However, at an earlier point in the lecture Dr Anderson showed a couple of examples from Goya’s series, Los Caprichos. Then she added that there are some paintings she cannot quite deal with – she had never given a lecture on Goya’s series, Disasters of War and probably never will. 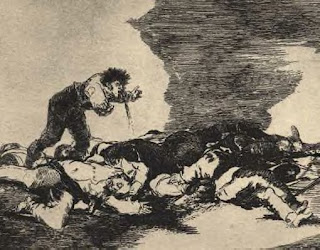 There was the answer to the conundrum: real evil is not imaginary monsters but what men do to each other (oh yes, and women). That is the real horror we have to face and one from which often escape through grim jokes and laughter. For, as a very knowledgeable person said to me once about the Soviet Union under Stalin, if you did not laugh, if you really thought seriously about what happened, you would go mad.
Posted by Helen at 11:07 PM