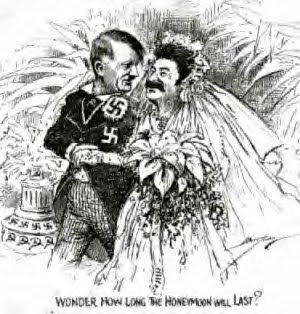 The seventieth anniversary of the start of World War II will have many dates to remember. The biggest of all, though, was yesterday: the signing of the Nazi-Soviet Pact by the two Foreign Ministers, Vyacheslav Molotov and Joachim von Ribbentrop. This act was the real start of the war and I ought to have noted it.

Two excuses: the Pact was actually dated the 24th so today will do (sort of); and it needs a long piece that will involve a discussion of matters in and around the EU. Therefore, I have decided to put up a small notice now with a contemporary cartoon and shall write about the whole episode, its significance and the shadow it casts on politics, now later on.
Posted by Helen at 1:48 PM