"Passport to Pimlico" and politics 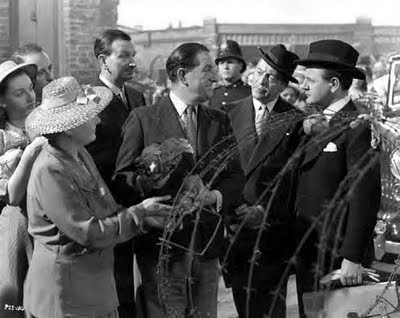 There are readers of this blog who will have assumed from the title that I cannot write about anything unless I bring politics into it. That is not necessarily true though a little bit of thought will make people realize that any kind of public entertainment, which film-making most certainly is, has some form of political aspect to it. (That is known as setting up a strawperson and knocking it down. Heh!)

A few days ago a friend who now lives and works in Washington asked a number of people which films they would consider to have pro-freedom/libertarian messages. Those are not identical, of course, and I am more interested in the pro-freedom films of which there are not very many.

I suggested “On the Waterfront”, “Blazing Saddles” and all the Ealing comedies, which are anarchic in their outlook. (Someone else had already suggested “The Lives of Others” and I am not sure about Wajda’s films, much as I like them.) Yes, was the reply about the Ealing comedies, especially “The Titfield Thunderbolt” and “Passport to Pimlico”. It is a long time since I have seen either, so this week-end I watched a DVD of the latter – one of the best British films ever.

The late forties and most of the fifties saw the best period in British film-making. Practically all the films, comedies like “Passport to Pimlico”, thrillers like “Noose” or dramas like the brilliant “It always rains on Sunday” stand up well to the test of time, unlike the rather precious works of art produced in the sixties and seventies.

The earlier films are full of excellent actors, many of whom then went on TV and that may well be the reason why we think nostalgically of the various plays, series and sit-coms of the sixties and early seventies. The films also had directors who kept a tight control on plots and characters without pushing their own egos to the forefront.

Interestingly, though they are not anti-British and are, indeed, affectionate in their attitudes to the country, they do not paint a rosy picture. Post-war Britain, according to these films, is a grey, dreary place, with people’s lives circumscribed by shortages and rationing, in place for several years after the war; by a certain lack of imagination in the people themselves; and by the ever-present authority: bumbling, inflexible, inefficient.

The only way one can have any fun at all is either by going abroad as Alec Guinness’s character Henry “Dutch” Holland does in “The Lavender Hill Mob” or by temporarily taking one’s territory out of England as it happens both in “The Titfield Thunderbolt” and “Passport to Pimlico”. And none of that lasts for very long.

It is clearly the aim and almost the duty of every citizen to avoid the law as much as possible if not actually break it but that runs into difficulties. Buying goods on the black market may not seem to be a bad idea and is, in fact, necessary for survival but behind the rascally spiv there are usually large vicious organizations of criminals. Such an organization is defeated in “Noose” by a motley group led by an ex-commando journalist and consisting of his journalist girl-friend and a group of demobbed soldiers who keep in training in an East End boxing club. The police are shown to be somewhat useless.

The plot of “Passport to Pimlico” is fairly well known. When a left-over German bomb explodes in a street in Pimlico (a London borough, then largely working class, for non-British readers) the residents discover a great deal of gold, brought over by Duke Charles I of Burgundy, who had supposedly been killed at the siege of Nancy but had really escaped to England and been granted all sorts of rights by Edward IV. They also find a document, deciphered by Margaret Rutherford’s batty professor (professors in Ealing films are always batty) that shows the street to be Burgundian territory.

At first, this seems like an excellent idea. Ration cards are torn up, licensing hours are disregarded, export materials ordered. Then, trouble arrives in the shape of every trader, con-man, spiv, crook and criminal of London piling onto the wasteland that the locals want to convert into a playground for their children.

This is an interesting moment for the locals. Until now they had understood two ways of living that often went in parallel: you obeyed the government or you dodged its endless control. Now they begin to realize the need for a legal structure to underpin freedom and that means a government of a kind, which is established under the leadership of the suddenly appearing descendant of the Duke.

There are various other twists and turns, ridiculous civil servants played by that incomparable duo, Naunton Wayne and Basil Radford, and a good deal of gentle chaffing of the English – so defiant, so generous and so utterly unimaginative and unenterprising.

In the end it all comes right – the “Burgundians” lend their treasure to HM Government and get a good interest for their own use, which means that the playground will most definitely be built; the ration books reappear and are welcomed as a useful alternative to starvation or charitable donations; the Duke, presumably, returns to Dijon; and the people of a Pimlico street become British again, having briefly tasted freedom, its problems and its possibilities.

There is one more twist but it comes at the beginning of the film. Though made in 1949, some years before rationing in Britain was abolished, it is dedicated to the memory of the ration book.
Posted by Helen at 12:31 AM