Danish cartoons to be exhibited 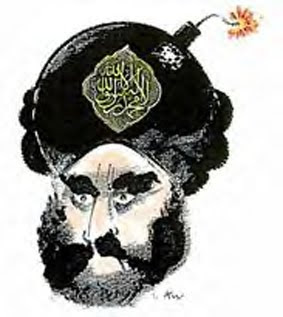 A Danish gallery has decided to exhibit a caricature of Muhammad that unleashed a wave of protests in the Muslim world against Denmark in 2006. Citing an article in magazine Sappho, Agence France-Presse reports that the controversial caricature will be part of a larger exhibition dedicated to the watercolor works of the artist-caricaturist Kurt Westergaard at the Galleri Draupner in Skanderborg.

Kurt Westergaard and his family have had a few problems because of that cartoon (the best of the 12, in my opinion) and this distinguishes him from many an artist, described as "courageous" who would never step outside the boundaries of what is prescribed by accepted opinion and the grant-giving organizations. (Here and here.)

The Danish gallery is behaving somewhat differently from the far richer and more important Yale University Press but let us not forget that this country's main stream media, to its eternal shame, is unique in the West in not publishing those cartoons even once. In fact, they proved themselves to be more pusallinimous than some Middle Eastern newspapers.

MEANWHILE: Roger Kimball's positively final word on Yale University Press and the Danish cartoons. Somehow, I think the story is not really over.
Posted by Helen at 3:17 PM