Freedom is as freedom does 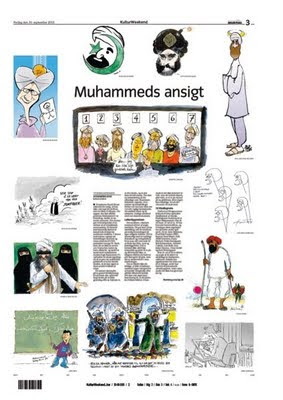 Next time somebody tells you about the glories of academic research, academic thinking and academic publishing, tell them about this. Hot Air quotes the New York Times article, which informs the sadly unsurprised world that

Yale University and Yale University Press consulted two dozen authorities, including diplomats and experts on Islam and counterterrorism, and the recommendation was unanimous: The book, “The Cartoons That Shook the World,” should not include the 12 Danish drawings that originally appeared in September 2005. What’s more, they suggested that the Yale press also refrain from publishing any other illustrations of the prophet that were to be included, specifically, a drawing for a children’s book; an Ottoman print; and a sketch by the 19th-century artist Gustave Doré of Muhammad being tormented in Hell, an episode from Dante’s “Inferno” that has been depicted by Botticelli, Blake, Rodin and Dalí…

So, we have a book about the Danish cartoons that will not be illustrated by those cartoons. Brilliant. Just the sort of fearless enquiry one wants to see.

Furthermore, Yale (both Press and Universiy) are happy to go along by non-publication with the notion that Mohammed has never been depicted before and certainly not in the Muslim world. After all, they will not publish an Ottoman print either.

At least, as AllahPundit on Hot Air says, there is no equivocation of why they are censoring their own publication: naked fear of reprisals. But you know, they can't get all of us. Not even the New York Times, whose account of what happened after the cartoons were published is somewhat economical with the truth as Gateway Pundit details.

PS Michael Moynihan echoes my sadness that it should be Yale University Press that has shown itself to be "yellow" as James Cagney's Rocky Sullivan says in "Angels with Dirty Faces". They had taken on the so-called liberal, pro-Communist establishment, after all. Their Annals of Communism series has changed for ever the way that evil system is viewed and has made it possible to write more clearly about Communist infiltration in the United States. And now this.

UPDATE: Roger Kimball stays with the story and points out that, contrary to what the NYT said, the advice to remove the illustrations from a serious book about the Danish cartoons was not unanimous. Indeed, there were many good reasons advanced by those asked why they should be kept in. Nor does it seem likely that it was the threat of violence that really underlay the decision. Well, what else could it be? Money? Surely not.
Posted by Helen at 2:08 PM