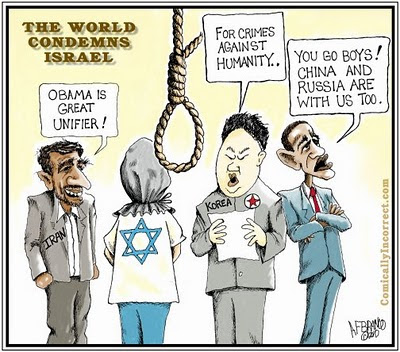 In the first place, here is an excellent cartoon by A. F. Branco, which came my way through Facebook, so I am stealing it quite unapologetically.
Secondly, as one reader of this blog pointed out to me, not so long ago (just about a week, in fact), Turkey, whose government (though not, I think, the armed forces) backed that Gaza flotilla and financed one of the boats as well as huffing and puffing with indignation, was censured for its unpleasant habit of imprisoning Kurdish children for alleged terrorist acts.
Now you might argue what business it is of the Council of Europe and of its envoy what Turkey does with its own citizens even if said citizens are still children. I wouldn't myself argue that but other people might. However, there is a corollary: what business is it of Turkey's that Israel refuses to allow people to land arms in Gaza?
Thirdly, a news item from another reader. There is, indeed, another blockade going on in the Middle East, one that is not receiving any attention from the world media. Yemen has been blockading South Yemen for over three weeks. And that, my friends, is a real blockade. No pussyfooting with aid or medication or basic necessities being let through.

The blockade began 17 days ago when the Western Armored Division established new checkpoints on roads and at city entrances preventing the flow of persons and commerce including food, medicine, oil and water. The blockade has cut off Radfan, Yafea, al Dhala, al Melah, al Habeelan, al Shaib, Gahaf, Lazarik, and parts of Shabwah.

The main road between Aden and al Dahlie is closed. Al Habaleen, Lahj was indiscriminately shelled three days ago after two soldiers were killed in an ambush. Another ambush in al Melah killed one soldier, and authorities have accused renegade elements of the southern independence movement with the attacks.

Nearly one thousand have fled Radfan, al Habaleen and al Bilah seeking safety. Like the 250,000 internally displaced by the Sa’ada War, these are mostly women and children. On May 24, a pregnant woman en route to a hospital in Aden was stopped at a military checkpoint and later died in childbirth.

Where, one wonders, is the outrage? The furious demonstrations? The angry denunciations and feeble condemnatory statements? Oh yes, there was one. Yemen condemned Israel for its inhumane treatment of the flotilla denizens.
Posted by Helen at 12:47 AM