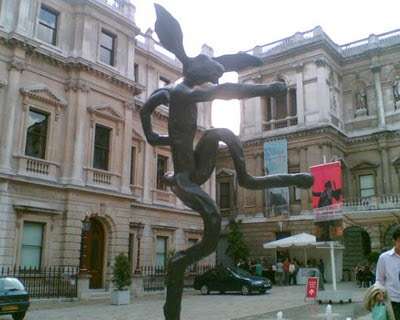 The week-end silence had nothing to do with the World Cup, which I shall start being interested in once England is out after the quarter finals and the general hysteria abates. I like football as a game and have always found the World Cup interesting. I would support England if it were not for the hysteria and the sudden fascination for the game among people who cannot tell one end of a football pitch from another and have not the slightest idea of how it is really played.

Going home on Saturday evening I encountered hundreds of fans draped in England flags; they were shouting, screaming, chanting, whistling and so on. I assumed that England had won her first game and shrugged my shoulders. Beating the US ought not to be too difficult as football (or soccer as they call it on the other side of the Pond) is a relatively new interest there. In any case, it was only the first game. What will happen later on I wondered. Then I found out that far from winning, England had drawn and had not actually performed particularly well. Yet the fans were hysterical. I rest my case.

My week-end was taken up by a second visit to the National Portrait Gallery's splendid free exhibition of the Indian Portrait (on for another week) and a relatively quick wander round the new Summer Exhibition at the Royal Academy on Saturday. All I can say about the latter is that it is largely inoffensive with a few interesting works. Anyone who happens to be passing the RA needs only to walk into the courtyard where the best of those works are: no fewer than three Hares by the late Barry Flanagan RA. My favourite is Nijinsky Hare as pictured above.

Sunday was taken up by that splendid London institution the Open Garden Squares week-end and a wander round the normally locked garden squares of Belgravia an Pimlico. OK, you've missed it this year but make a note of it for next summer.
Posted by Helen at 12:43 PM