Whither the Dutch government? 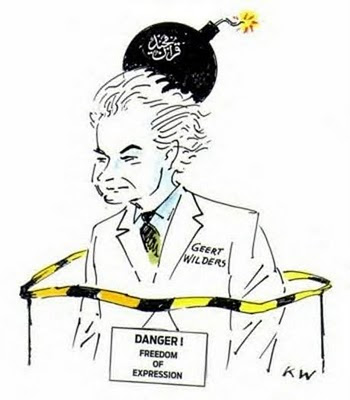 Eighty eight per cent of the votes have been counted in the Netherlands, according to the Telegraph report this morning, and the result is promising to be very interesting. Setting aside the newspaper's mindlessly repetitive description of Geert Wilders' Party for Freedom (PVV)as being "far-right" because it wants to control immigration of people who have no desire to adapt to the country's very liberal culture, what the article tells us ought to make a lot of people sit up.

With 88 per cent of the votes counted, published partial results showed the Liberals with 31 and Labour on 30.

But the real victory went to Geert Wilders' Party for Freedom (PVV), which demands an end to immigration from Muslim countries and a ban on new mosques. The PVV took its number of seats from nine in the last parliament to 24, and could hope to enter a coalition government.

Mark Rutte, the Liberal leader may have the mandage to become Prime Minister but he will need at least three other parties to secure the necessary majority in Parliament. He can, of course, leave out the PVV but that is likely to cause a few problems. Geert Wilders said quite firmly when he was in London that he did not mind leading the largest party in opposition.

AP suggests, on the basis of 93 per cent counted, that

The most likely outcome appears to be a centrist coalition with VVD and Labor combining with two smaller parties on the left, the Green-Left and Democrats-66, who both won 10 seats.

Yet neither the top two parties will be able to form a government without major compromises on ideology.

The VVD has pledged to slash the deficit by cutting government spending and welfare programs while Labor has criticized the program as harmful to the poor.

Labor wants to preserve government social programs, raise taxes on the wealthy and make it easier for immigrants to integrate rather than punishing those that fail.
Although not as outspoken against immigration as Wilders, Rutte has also argued that immigrants who cannot contribute to the Dutch economy should not be allowed to come, and he would ban them from receiving welfare for 10 years after arrival.

In the meantime, the ousted PM, Jan Peter Balkenende stays on as caretaker Prime Minister. What a good thing that this sort of a messy situation cannot happen in Britain. Oh wait ....

UPDATE: The talk is now of a Centre-Right coalition government in the Netherlands, which would included Geert Wilders. We shall see. In the meantime, I have spotted a truly idiotic headline on Sky News website: Far-Right Breakthrough Shocks Netherlands. Remind me, how did that far-right breakthrough happen?
Posted by Helen at 11:21 AM