Free speech is not for everyone 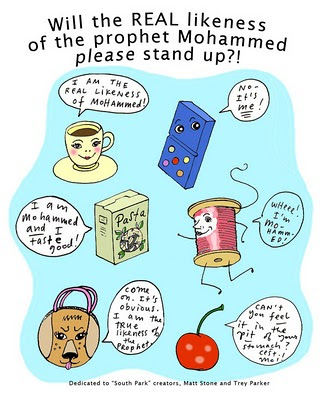 Or so it seems. This blog ought to have picked up on the story of Molly Norris a few days ago but better late than never. Here is the Washington Examiner on the subject:

Last week, the Seattle Weekly announced that Molly Norris, its editorial cartoonist, had "gone ghost." Put another way, she went into hiding. The FBI told her she had to because otherwise it couldn't protect her against death threats from Muslims she'd angered. Earlier this year, Norris started "Everybody Draw Mohammed Day" to protest radical Muslims' violently stifling freedom of speech and conscience. Incredibly, her plight has drawn precious little media attention, even though it is infinitely more newsworthy than, say, a fundamentalist preacher in Florida threatening to burn Qurans.

Indeed, it is more newsworthy, or ought to be. Here we have a clear example of an artist and journalist (good cartoonists are both) being silenced by threats from a vociferous minority and the media, so proud of its so-called courage when it is a question of flinging endless insults at Sarah Palin or the Tea-Partiers, is silent. (Molly Norris actually tried to backtrack from the whole Draw a Mohammed Cartoon Day but, clearly, that did not work.)

When The Examiner asked the American Society of News Editors for a statement on the issue, none was forthcoming. This despite the fact that the first sentence of ASNE's Web site describes its mission as supporting "the First Amendment at home and free speech around the world." We got a similar response from the Society of Professional Journalists, despite its dedication "to the perpetuation of the free press as the cornerstone of our nation and liberty."

The security services are at a loss and can do nothing but tell the lady in question to go into hiding and behave as if she is a criminal on the run.

Freedom of speech and press are in deep trouble when the American government thinks the best it can do to protect a journalist from death threats is to counsel her to go into hiding, and when the elite voices of American journalism can't be bothered to say anything in her defense. But it's actually worse than that. The New York Times' Nicholas Kristof thinks Muslims are owed an apology. "I hereby apologize to Muslims for the wave of bigotry and simple nuttiness that has lately been directed at you," he wrote Sunday. "The venom on the airwaves, equating Muslims with terrorists, should embarrass us more than you."

Instead of telling the rest of us that we're all bigots, shouldn't Kristof and the rest of the journalism profession be outraged by what has happened to Molly Norris? And shouldn't they be angered that her government believes it cannot protect her? Imagine what they would be saying if white-hooded members of the Ku Klux Klan were threatening to kill Norris in Selma, Ala., instead of radical Muslims in Seattle. Would the FBI tell Norris she had to stop being a journalist and go into hiding? And would ASNE and SPJ look the other way as the First Amendment and freedom of the press were symbolically turned to ashes by flaming white crosses?

The reality is that the FBI fought the KKK at every turn, including when it threatened brave Southern newspaper editors who stood up against racism and violence. And from the start, journalists were prominent figures in the civil rights movement, courageously reporting the truth about the crushing stranglehold of segregation on life and liberty across the old South, often at risk of their very lives. It's time the present generation of American journalists found the same brand of courage many of their fathers showed in the 1960s.

Nor have we heard much from the President who was quick to say that building a mosque near Ground Zero is an example of the First Amendment (mind you, he was just as quick to retract).

James Taranto picked up the story a couple of days earlier and asked that very pertinent question:

Here's another question: Where is President Obama? Last month, speaking to a mostly Muslim audience at the White House, the president strongly defended the right of another imam held up as a moderate to build a mosque adjacent to Ground Zero. The next day, and again at a press conference last week, Obama said he was merely standing up for the First Amendment. As far as we recall, it's the only time Barack Obama has ever stood up for anybody's First Amendment rights.

Now Molly Norris, an American citizen, is forced into hiding because she exercised her right to free speech. Will President Obama say a word on her behalf? Does he believe in the First Amendment for anyone other than Muslims?

Here is the news of Molly Norris being put on the hit list in July.
Posted by Helen at 11:28 AM